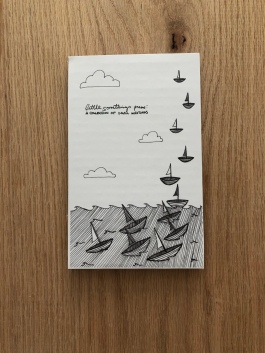 issue one is a 5″ x 8″ hand-bound cardboard book with upcycled grocery bags on the back cover. This issue features flash and micropoetry from 30 authors around the world (see below), and pen and ink/cut and paste illustrations. This little book explores the power of brevity while navigating the space between literary journals and zines. 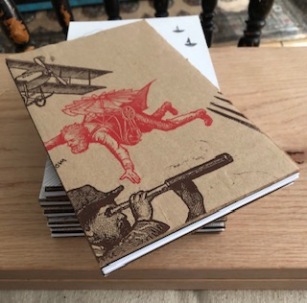 Troy Farah is an independent journalist and photographer living in California. His work has appeared in Tin House’s blog, WIRED, Ars Technica, and elsewhere. He co-hosts the drug policy podcast Narcotica. His website is troyfarah.com

C Nuñez de Ibieta believes the world is hard to read, our interpretations always subject to change, but, ultimately, without our collective stories, we’d really be in the dark.

Eric Favela is a first-generation immigrant and recent University graduate transitioning from writing exclusively in his head to writing on paper. This is his first publication.

Dani Raschel Jimenez lives in The Colony, Texas with her husband and daughter. Authors you can find on her bookshelves include Kafka, Murakami, and Cheever.

Adam Bjelland is an English teacher from Long Island. His work has most-recently been published in Junto Magazine and Borrowed Solace, and online at Underwood Press.

Jesse Sensibar‘s work has appeared in The Tishman Review, Stoneboat Journal, and Waxwing. His book, Blood in the Asphalt: Prayers from the Highway, was published in 2018 by Tolsun Press. You can find him at jessesensibar.com.

Alexander M. Koch lives in rural Maine and enjoys examining the natural world wherever he travels. He is a naturalist and book-collector finishing a degree in forest science.

Paul Shields is a writer based just outside Kyogle NSW. His work has appeared in Headland, Meanjin and elsewhere. He is the founding editor of lit.zine WOB – http://wob-lit.com.au/

Dah’s seventh poetry collection is Something Else’s Thoughts (Transcendent Zero Press). He is a Pushcart Prize and Best Of The Net nominee, and the lead editor of the poetry critique group, The Lounge.

Ashley Naftule is a writer based in Phoenix, AZ. He’s been published in Bright Wall/Dark Room, Coffin Bell Journal, Ghost City Press, and Moonchild Magazine. He Tweets as @Emperor_norton.

Addison Rizer is a senior at Arizona State University majoring in English. She has had one-act plays, short fiction, and poetry published previously. She loves writing, reading, and movies critics hate.

Ky J. Dio is a Slam Poet and the author of 5 chapbooks. She makes recycled art and works at a pawn shop. She lives in Flagstaff, Arizona.

Kelley McKenna is a Fulbright Grant recipient (Slovenia, 2015), currently working on a PhD in literary studies at Aberystwyth University, Wales. Her collection of shorts, Across the Cobbled Bridge, will be published this summer by Lion Tamer Press.

Howie Good is the author of THE TITANIC SAILS AT DAWN (Alien Buddha Press, 2019).

mary hope whitehead lee is a Sonoran Desert denizen and an active member of the Carboardhouse Press Cartonera Collective.

Jerrice J. Baptiste is a poet and author of eight books.  She’s been writing since the age of six and grew up in the Caribbean. Visit her at Guanabanabooks.com

Katherine Rawson is a freelance writer, children’s author, and local foods blogger. She lives and writes in a small town in Vermont. Visit her at: www.katherinerawson.com http://myediblebackyard.net and parrotspointofview.blogspot.com

William Doreski’s most recent book is A Black River, A Dark Fall (2019). His poetry, fiction, and reviews have appeared in many journals. He lives in Peterborough, NH.

Richard LeBlond is a retired biologist living in North Carolina. His essays and photographs have found favor in numerous U.S. and international journals.

Ed Doerr teaches and writes. His work appears in several publications including the poetry chapbook Sautéing Spinach With My Aunt (2018) and the micro-collection Eulogy For A Former Life (2018).

Harrison Geosits is an essayist and reluctant Texan. His work has appeared in Split Lip, Wildness, and more, and is forthcoming in a number of journals. He twitters at @HGeosits.

Charlotte Hammond lives in New Jersey with her husband and one-eyed cat. Her fiction appears in Pithead Chapel, the Talon Review, The Basil O’Flaherty and others.

Avra Margariti is a Social Work undergrad from Greece. She enjoys storytelling in all its forms and writes about diverse identities and experiences. Her work has appeared in several journals.

Beto Olivas is a civics educator and opera singer. He lives with 3 dogs and a Tarheels fanatic and thinks everybody should get together and try to love one another.

Robin Sutherland is completing a diploma in Writing For Film and Television at the Toronto Film School. Originally from Ontario, she now makes Prince Edward Island her home.

Liza Michelle Bevams is a storyteller currently at work on a long-form study about self-preservation in wild and lonely places. She’s dedicated to helping people communicate their stories.

Nichelle Santagata earned her BA in English Literature, and a minor in Film & Media Studies from ASU, Postgraduate Certificate in Comparative Literatures and Cultures at UofB in England, and Master of Liberal Studies from ASU.

Graeme Fox is currently in rehab for substance use following an overdose. He works at a methadone clinic, speaks Russian, advocates for the rights of people who use drugs, and loves writing.